The best way to support my work is through Patreon or PayPal. Days of UNREST are about to hit as we are about to be slammed by magnetic storms from coronal holes from the sun.  Cosmic unrest will increase the chance of seismic activity, volcanic eruptions, and health problems.  To protection, yourself purchase my new book,  Electromagnetic Radiation Protection Solutions, God's Marvelous Protective Provisions for the coming Nuclear and Cosmic Superstorm CRISIS

GEOMAGNETIC STORM WARNING: A large hole in the sun's atmosphere is facing Earth and spewing solar wind in our direction. The first contact with the gaseous material could take place during the late hours of Oct. 24th, certainly no later than Oct. 25th. NOAA forecasters say there is a 40% to 45% chance of G1-class geomagnetic storms when the solar wind stream arrives. 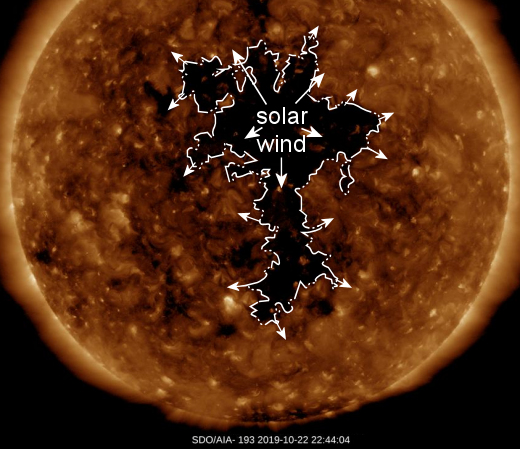 This hole (properly called a "coronal hole") is an old friend. It has been spinning around with the sun for more than four months, strobing Earth with solar wind at approximately 26-day intervals. It has previously sparked auroras in the USA as far south as Wisconsin, Michigan, Montana, Wyoming, Idaho, and Maine. Similar displays could occur this week if the coronal hole retains some of its old potency.

This map from NOAA shows where auroras could appear--most likely above the green line, corresponding to a planetary K-index of 5: 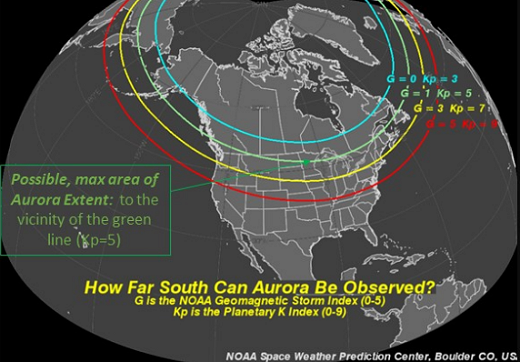 The only way to see this visually except to watch the Suspicious Observers 5-minute daily update.  It also includes a special for subscribers on the TRUTH CRISIS, in the segment Echoes, Mirrors, and Gerrymandering of truth.  This is a really important concept to understand.

COSMIC RAYS ARE INTENSIFYING: Cosmic rays in Earth's atmosphere are just 1.6% away from setting a Space Age record. Blame the solar cycle. During Solar Minimum--underway now!--the sun's magnetic field weakens and allows more radiation from deep space to penetrate the Solar System. This is pushing cosmic ray levels to record highs--a development that can affect air travelers and astronauts alike. Watch the numbers go up right here on Spaceweather.com. A man-made blaze on a remote Utah mountainside could provide valuable insights into the behavior of the powerful wildfires growing more and more common out West.  Read more Today's Suspicious Observers includes a special for subscribers on the TRUTH CRISIS, in the segment Echoes, Mirrors, and Gerrymandering of truth.  This is a really important concept to understand. Please watch.

Increased refugee flows, weather threats, and declining food security will deepen tensions already being exploited to divide and weaken the U.S. and its allies.

Lessons Learned 1 (LL1): History repeated itself in that no battle plan ever survives contact with the enemy. The unforeseen consequences of reliance on automation and the resulting escalations almost lead to World War III. No matter how sophisticated our systems become, it will always be important to keep human decision-making in the OODA (Observe, Orient, Decide, Act) loop.

Directed microwave and other Electromagnetic Pulse (EMP) weapons performed within accepted parameters. The 20th-century legacy electronic systems were rendered completely useless when overwhelmed with more energy than they could handle.

The Exoskeleton enhancements of the first pilot’s rescue team were deemed crucial to his successful retrieval. Their greater strength, endurance, and body armor helped them to safely return to U.S. lines. Perhaps even more valuable than the physical aspects of their equipment were their Augmented Reality (AR) displays that allowed them superior battlefield awareness and the ability to see through camouflage as if it was not even there. It is recommended that the U.S. continue the development of the next generation of full-body powered exoskeletons.  Army Mad Scientists

Classified spending has edged up faster than overall defense budget requests, and accounts for nearly 11 percent of the $716 billion proposed for 2020.

The share of Pentagon spending hidden from public view is rising, as are defense contractors’ revenues from it.

The U.S. Defense Department’s overall budget request increased nearly 5 percent from 2019 to 2020, but classified spending rose 6 percent, according to the consulting firm Avascent. It accounts for about $76 billion, or almost 11%, of the $718 billion requested for the current fiscal year.

"Science will make a difference in the battle between Good and Evil.  The crown jewel of this blossoming, futuristic agricultural empire will be Plum Island (now PIDAC in Kansas).”

“The food and animal crop resources of the USSR would have to be damaged within a single growing season to the extent necessary to reduce the present average daily caloric intake from 2800 calories to 1400 calories, i.e., the starvation level.  Reduction of the food resources to this level if maintained for 12 months would produce 20% fatalities, and would decrease manual labor performance by 95% and clerical and light labor by 80%.

In hungry Venezuela, food producers step up exports to survive

Venezuela’s hyperinflation means few can afford to buy. Compared to five years ago, the daily calories now consumed by the average citizen have fallen 56% to 1,600 calories, according to Caracas-based Citizenry in Action, a nutrition-focused nonprofit. That is well below the 2,000 to 2,500 calories per day recommended by the World Health Organization. Millions depend on government food handouts and subsidized staples.  Read more

Researchers are, quite literally, spinning up lab-grown meat 🥩
A “gelatin scaffolding” takes its inspiration from cotton candy. Wired

Pizza Hut is getting in on the meat substitute action. Engadget

This is the dynamics of what is unfolding in Cascadia, and it is similar to the 2011 Fukushima earthquake and tsunami

A new study from Caltech finds that so-called "slow slip" or "silent" earthquakes behave more like regular earthquakes than previously thought. The discovery opens the door for geoscientists to use these frequent and nondestructive events as an easy-to-study analog that will help them find out what makes earthquakes tick. Read More The war and peace issue
Can technology improve a human enterprise that is, by its nature, all about violence?

Curious about the Sumerians?

Book from 1963 explains their history, culture, and character. 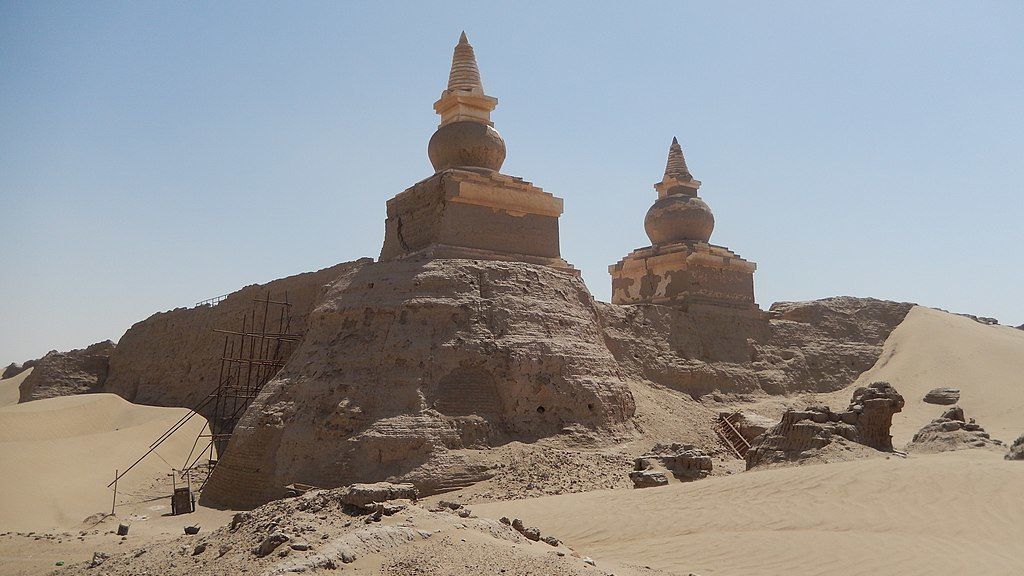 These ruins are what’s left of Heicheng, an important trade stop that was once the largest fortress along the Silk Road.  Read more

Unlocking the Potential of Vaccines Built on Messenger RNA (Nature) Other ways of making vaccines can achieve the same therapeutic objective. But the potency, versatility, speed of manufacturing, and low cost of mRNA make it an attractive platform for the rapid development and large-scale production of new or custom-made vaccines.

Cause of Polio-Like Illness Linked to “Missing” Virus

Multiple theories have circulated over the last seven years about the cause of a mysterious cause of paralysis in kids called acute flaccid myelitis (AFM). A new study provides some of the strongest evidence to date that AFM is caused by an enterovirus (EV) that invades and impairs the central nervous system. The team was able to detect immunological remnants of EV in spinal fluid from dozens of patients diagnosed with AFM.   + MORE

“He shall cover thee with his feathers, and under his wings shalt thou trust: his truth shall be thy shield and buckler.”  Psalm 91:4

Do you know?  Shield and armor will His truth be, A shield protects the wearer incompletely, whereas armor surrounds its wearer affording greater protection.  It is like full body armor.  This is no ordinary shield!  In the original language, shield means to be sharp or the barbed shield using which an enemy can be kept at a distance derived from the meaning that which is roundabout or to move around in a circle denotes a protective armor that surrounds the entire body.

Join my patrons as we dig into Psalm 91!

.God Bless you from the trenches.  Be safe everyone.