Behind the Scenes with Celeste-Catastrophe-Extinction-Redemption

Your space weather for today is quiet until the coronal hole plasma wind stream hits us in a few days.  Space Weather Dashboard A collaboration between researchers in Japan, the USA, and Russia has found a hot spot in Earth's radiation belt where killer electrons, which can cause serious anomalies in satellites, form. The finding, published in the journal Geophysical Research Letters, could help scientists more accurately forecast when  Read more

Construction of the clock involves a series of tunnels and chambers within the mountain.The Long Now Foundation

Hours away from any airport, deep in the heart of the Sierra Diablo mountains along the Texas-Mexico border, a 500-foot-tall clock is taking shape. In an era when atomic clocks can tick billions of times a second, the colossal timepiece will tick once a year — for the next 10,000 years.

Designed by Danny Hillis, the Clock is designed to run for ten millennia with minimal maintenance and interruption. The Clock is powered by mechanical energy harvested from sunlight as well as the people that visit it. The primary materials used in the Clock are marine grade 316 stainless steel, titanium and dry running ceramic ball bearings. The entire mechanism will be installed in an underground facility in west Texas.

There is a Clock ringing deep inside a mountain. It is a huge Clock, hundreds of feet tall, designed to tick for 10,000 years. Every once in a while the bells of this buried Clock play a melody. Each time the chimes ring, it’s a melody the Clock has never played before. The Clock’s chimes have been programmed to not repeat themselves for 10,000 years. Most times the Clock rings when a visitor has wound it, but the Clock hoards energy from a different source and occasionally it will ring itself when no one  is around to hear it. It’s anyone’s guess how many beautiful songs will never be heard over the Clock’s 10 millennial lifespan

Beta testing quick DNA identification, sold as a public good.  I was in initial meetings after the megathrust (or was it-government secrets, you know) Indonesian Tsunami it was determined that both the living and dead needed to be genetically identified and chipped.  The article being released after the tragic volcano taking lives.  This from Homeland Security Newswire:

Thirty-four people died in a tragic boat fire on 2 September 2019, off the coast of Santa Cruz Island, California.

Thirty-four people died in a tragic boat fire on 2 September 2019, off the coast of Santa Cruz Island, California. Five crew members escaped with injuries after calling for help, but the intense fire aboard the Conception dive boat left the other victims unrecognizable. Thanks to a technology funded by the Department of Homeland Security (DHS) Science and Technology Directorate (S&T) and developed by Massachusetts-  and Colorado-based ANDE Corporation, the 33 passengers and one crew member who died were quickly identified.

Obama's civilian army springs to life, there are more connecting dots than just this one info node

The military is now not about protect the American people it is increasing being used as a global agenda implementation tool.

A technology that many hope will prevent the worst effects of climate change could also produce fuel or other defense products. Read more 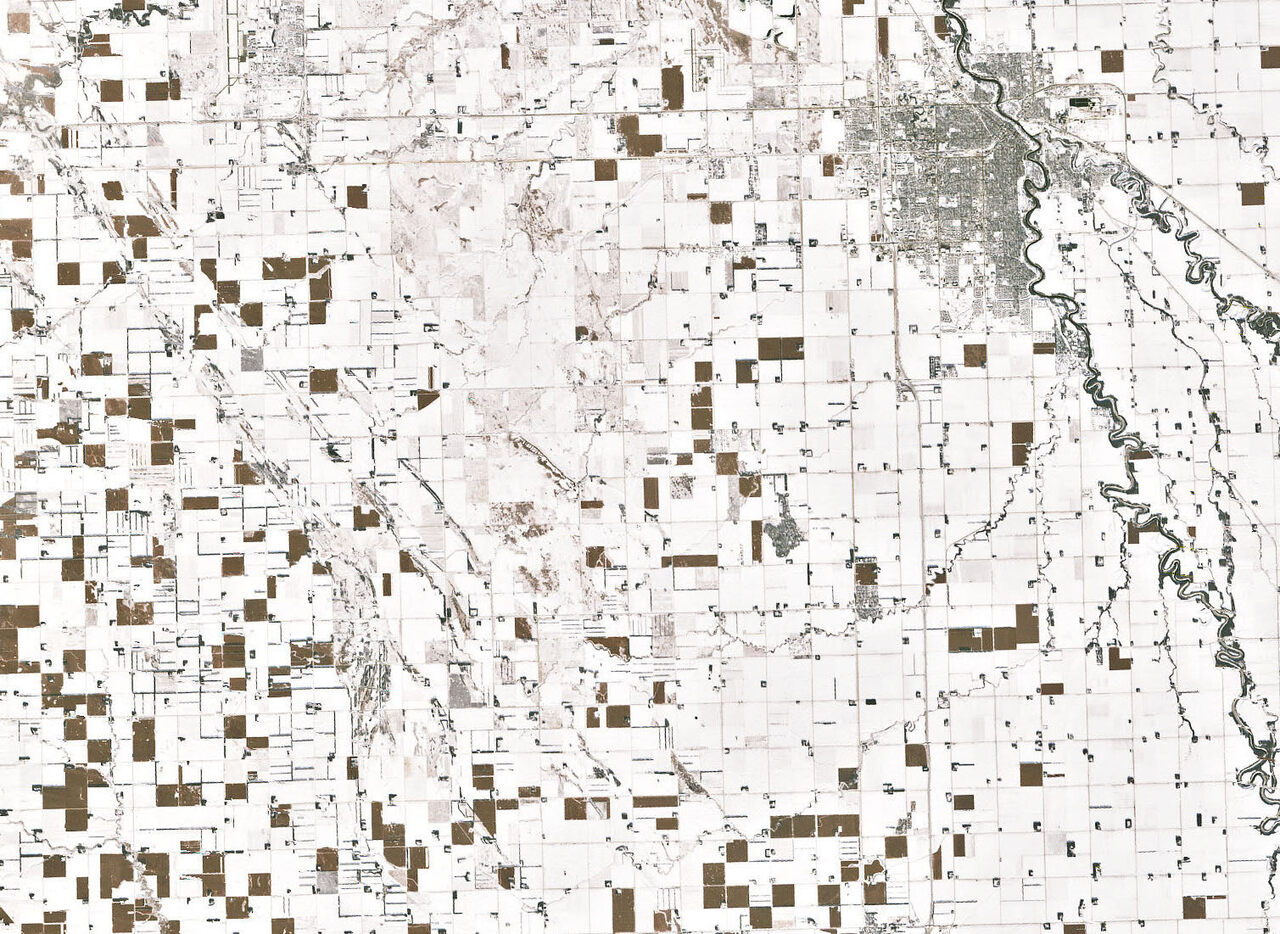 The patchwork shows expanses of snow, interspersed with fields of corn that are toughing out the winter weather. NASA Earth Observatory

Recently, a heavy snow carpeted the fields that stipple eastern North Dakota. Afterwards, satellite images captured wispy clouds and shadows above swaths of white. Images of agricultural communities near the squiggly Goose River, such as Hillsboro and Mayville, also revealed something else: a slew of little brown squares among the white ones, which made the landscape look like a patchwork of pixels. The flecks of brown turn out to be vast expanses of corn that never made it out of the field, and that will now spend the winter under a blanket of snow.  Read more

Your food supply and the precedent for the Mark of the Beast.  I was and am an active part of the chipping resistance although it appears as though physical chipping is being usurped by implants and DNA tattoos and barcodes.

n 2009, small farmers and ranchers breathed a sigh of relief. So did people worried about another curtailment of individual liberty and those whose religious principles oppose microchipping.

They thought they had driven a stake through the heart of the National Animal Identification System (NAIS), a USDA-run, state-implemented, program whose goal was to microchip and track all livestock, right down to the smallest chick on the smallest farm.

But three years later NAIS has risen from the grave. Now the monster goes by a different name — Animal Disease Traceability (ADT) — and claims to be (cough) kinder and gentler. Don’t be fooled. ADT is at least as insidious as NAIS.  Read more

Why are our food animals and plants so sick?  Intentional genetic modification is weakening stock and cosmic rays are damaging these canaries in the coal mine.  You are not immune.  Right now your physical body is be changed.  Will our food animals survive?  Will you?

New data released by the US Food and Drug Administration (FDA) shows that the amount of medically important antibiotics sold and distributed for use in food-producing animals rose by 9 percent between 2017 and 2018, after a 3-year decline. "I'm concerned that we're going in the wrong direction," says one expert.  Read more

Signs of the times from the Homeland Security Newswire.  We all need to know how and to implement radioactive decontamination, especially in our food products.

Following the accident at the Fukushima nuclear power plant in March 2011, the Japanese authorities decided to carry out major decontamination works in the affected area, which covers more than 9,000 km2. The European Geosciences Union (EGU) has published a collection of studies providing an overview of the decontamination strategies used and their effectiveness.

Following the accident at the Fukushima nuclear power plant in March 2011, the Japanese authorities decided to carry out major decontamination works in the affected area, which covers more than 9,000 km2. On 12 December 2019, with most of this work having been completed, the scientific journal Soil of the European Geosciences Union (EGU) is publishing a synthesis of approximately sixty scientific publications that together provide an overview of the decontamination strategies used and their effectiveness, with a focus on radiocesium.

·  In cultivated areas within the special decontamination zone, the surface layer of the soil was removed to a depth of 5 cm and replaced with a new “soil” made of crushed granite available locally. In areas further from the plant, substances known to fix or substitute for radiocesium (potassium fertilizers, zeolite powders) have been applied to the soil.

·  As far as woodland areas are concerned, only those that were within 20 metres of the houses were treated (cutting branches and collecting litter).

It’s hard to imagine that the cold, dusty, and desolate planet Mars once looked very different. Some 4 billion years ago, a thick atmosphere is thought to have protected its surface from damaging radiation, enabling water to flow on its surface — it may have even hosted life.

Today, things are very different. The Red Planet’s atmosphere is 100 times thinner than that of Earth’s and is made up of 95 percent carbon dioxide. It might sound harsh, but the Martian climate may actually be far more stable than Earth’s, according to new data.  Read more

An empty petri dish with two optical fibers, illustrating one version of the researchers' experiment. The left-hand fiber (usually shining infrared light, but depicted here as visible red light) is a temperature sensor. The top fiber shines green, red or blue light into the petri dish to adjust the signal that the temperature sensor measures. [J.L. Lee/NIST]

Researchers at the National Institute of Standards and Technology (NIST) report the development of a new kind of sensor to study tissue growth in the lab. Their paper (“A photonic pH sensor based on photothermal spectroscopy“), published in Sensors and Actuators B, describes a small sensor that uses a light-based signal to measure pH, an important property in cell-growth studies.  Read more

AI for Peace (War on the Rocks)

In 1953, President Dwight Eisenhower asked the world to join him in building a framework for “Atoms for Peace.” He made the case for a global agreement to prevent the spread of nuclear weapons while also sharing the peaceful uses of nuclear technology for power, agriculture, and medicine.

“Killing in the Age of Algorithms” is a New York Times documentary examining the future of artificial intelligence and warfare.

Do I need to worry about a Terminator knocking on my door? Read more This amazing ancient cave was kept secret for seven years to protect it from the public.

In May 1968, workers at the Hartuv quarry in the Judean Hills were quarrying with explosives. Each blast was much like the one before, until a strange gap opened up in the rock face. Peering inside, the men discovered a large cave, its roof dripping with stalactites, the oldest of which would later be dated to around 300,000 years old.  Read more

Deep in the bowels of a cave system on the Indonesian island of Sulawesi, in a dim chamber accessible only to the most intrepid of spelunkers, lies a red-tinted painting depicting what appears to be a vivid hunt or ritual. In the scene, two wild pigs and four anoas, or dwarf buffaloes, scurry about as their apparent pursuers—mythical, humanoid figures sporting animal features like snouts, beaks and tails—give chase, armed with rope- and spear-like weapons. Read more

A study from the University of Buffalo provides additional evidence that diet matters. It is likely in the best interest of people that have early age-related macular degeneration (AMD), to limit their intake of processed meat, fried food, refined grains, and high-fat dairy to preserve their vision over time.  Read more

For His kindness endures forever, Psalm 136

God exercises His power over the world through the agency of the heavenly bodies.  Nothing is left to fate.  It is God alone Who ultimately control's mans destiny. Everything God does is for the sake of this world. He is motivated by His overriding desire to perform acts of kindness for all His creations.

Ought not, we do the same this Christmas season (and everyday) as we emulate our Savior Jesus Christ?

Your thoughts please, as we look upward, for our redemption draweth nigh!