On January 15th I talked with George Noory on Coast to Coast AM about Extinction Level Events. Your space weather for today: Quiet.  That said our sun is waking up so get educated on what that means to you.

Your three-day space weather forecast is:  Kp is flatline right now but will be increased, albeit in the quiet range.

The thermosphere is: COLD

The Cosmic Rays Showers are: HIGH and are increasing

A student flight this last week captured 20 uSv (microsieverts) of radiation from neutrons from cosmic rays.

Where do these neutrons come from? Space. When cosmic rays hit Earth's upper atmosphere, they produce a spray of neutrons, which have little trouble reaching the ground and into you. Neutrons can altar your DNA being biologically effective.

On holiday, no news.

Independent mainstream media outlets are engaging in a politically-motivated campaign to force YouTube to demonetize and hide any video that denies climate change.

Published on Avaaz’s website, the left-leaning non-profit group released a report on January 16 that claims YouTube is profiting by broadcasting misinformation to millions of people by giving climate denial videos too much prominence. The report is an undisguised intimidation campaign, as not only does it list major advertisers who are running ads on videos that question the legitimacy of the threat climate change poses for humanity, but it explicitly calls for them to put pressure on the platform as a means of putting an end to the so-called disinformation.  Read more

The trend is everything must be made out of thin air and controlled by the Prince of the Power of the Air.  Food,water, and currency-the list is growing exponentially.  When will the decision that people must be thin air-enter the world of spirit?  Will you be in the heavenly or hell domain?

Water on Demand from the Air

Providing potable drinking water in low resource or contested environments is no simple undertaking. DARPA’s new Atmospheric Water Extraction (AWE) program sets out to sharply reduce that risk by giving deployed units the technology to capture potable water on the spot from the air in quantities sufficient to meet the daily needs of the warfighter, even in extremely dry areas of the world. 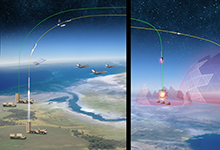 DUAL USE Technology: For PTSD patients this may be a good thing but has an active program to suppress our cellular memories of past cataclysms been activated?  They do not want you or your cells to remember.

Concerns around the environmental impact of modern farming are causing us to reassess our relationship with food. But claim that lab-grown food will replace agriculture in the coming decades realistic?

British journalist and environmental activist George Monbiot made a stir last week with the release of his documentary Apocalypse Cow, in which he claims that a technology called “precision fermentation” could make traditional farming obsolete in just a few decades. Read more


A new protein made from air, water and renewable electricity could revolutionize our food system within the next decade.

Insecticide Use on the Rise

Scientists have identified pesticides—specifically a group of insecticides called neonicotinoids (abbreviated as “neonics”)—as likely to be an important cause of declining pollinator populations and poor pollinator health. Neonics are the most widely used insecticides in the world and have been repeatedly shown to have lethal and sub-lethal effects Read more

This is part of the three-part Asilomar Framework: GMO all life, geo-engineer, and finally AI the world.

Viewpoint: GMO crops should become a bigger part of the food system if we want a sustainable society

Decades have passed since genetic engineering and agriculture were linked positively—in the media at least. We love the idea of a sustainable society but we detest the idea that leads to it. We talk of creating life on other planets but the lives on our own planet are suffering miserably. Read more

Venus is so bright right now it is casting shadows. Read more How to film the Milky Way.  Video link

What happens when a solar flare hits earth from the sun?  Sudden temperature fluctuations that occur quickly. This book is the sequel to Palaeomagnetism and Plate Tectonics written by Michael W. McElhinny, first published in 1973. The aim of that book was to explain the intricacies of paleomagnetism and of plate tectonics and then to demonstrate that paleomagnetism confirmed the validity of the new paradigm. Today it is no longer necessary to explain plate tectonics, but paleomagnetism has progressed rapidly over the past 25 years. Furthermore, magnetic anomaly data over most of the oceans have been analyzed in the context of sea-floor spreading and reversals of the Earth's magnetic field. Oceanic data can also be used to determine paleomagnetic poles by combining disparate types of data, from deep-sea cores, seamounts, and magnetic anomalies. Our aim here is to explain paleomagnetism and its contribution to both the continental and the oceanic environment, following the general outline of the initial book. Read book Horrifying videos are emerging of a massive dust storm that has swept through rural Aussie towns with one woman calling them “monsters”. A mother who captured incredible footage of a huge shroud of dust hitting her town in rural New South Wales says these “monsters” are the “new norm” for communities like hers.  Read more

This satellite indicates that the Taal volcano may erupt into a VI 6 that would send ash into the stratosphere and cooling the plant.  It has been some time since we saw a powerful enough volcano that would cool the planet significantly and reduce the food supply greatly.  The dots on this image are the indicators of the circumference of what is brewing underneath the surface.

Dramatic Changes At The Heart Of Taal Volcano Spied By Satellites

The eruption at the Philippines’ Taal volcano, while still ongoing, appears to be quietening down a little. But volcanic earthquakes continue to rock the region, and fissures have appeared all around the shores of the expansive Lake Taal. The Philippine Institute of Volcanology and Seismology, or PHIVOLCS, have attributed both phenomena as a sign that magma is still intruding into the shallow subsurface. Consequently, the alert level remains at 4, indicating that a more hazardous explosive eruption – potentially a nightmare scenario for the region – could still transpire within hours to days.  Read more

Terrorism: The Dirty Bomb Threat That Could Make Your City Uninhabitable — Tomorrow

One supposed difficulty terrorists have effecting dirty-bomb mayhem is obtaining the radioactive material — but it turns out that this may not be so difficult after all.

For that material is as close as your local hospital.  Read more

Incremental biometrics, one convenience at a time. The discovery in southwest Colorado, US, suggests the Pueblo people had a firm grasp of the Sun’s movement across the skies. Located in the Mesa Verde National Park, the Pueblo people carved incredible settlements into the bare rock of Colorado’s numerous canyons.  Read more

Human behavior is influenced by many things, most of which remain unconscious to us. One of these is a phenomenon known among perception psychologists as "pseudo-neglect." This refers to the observation that healthy people prefer their left visual field to their right and therefore divide a line regularly left of center.

A study published on Friday, January 10, in the online magazine PLOS ONE now shows for the first time what effect this inconspicuous deviation had in the prehistoric past. A Slovak-German research team has investigated the alignment of early Neolithic houses in Central and Eastern Europe. Scientists of the Collaborative Research Center (CRC) "Scales of Transformation" of Kiel University (CAU) and the Slovakian Academy of Sciences were able to prove that the orientation of newly built houses deviated by a small amount from that of existing buildings and that this deviation was regularly counterclockwise.  Read more

Is harnessing tech good or not so good to fulfill the Great Commission?  As I war with electronics each day, I can share with you that the battle is intensifying.

2020 Is the 'Year of the Bible': Harnessing Tech to Fulfill the Great Commission

Musicians and politicians are declaring 2020 the "year of the Bible". It's a year-long campaign to promote a global celebration of the Word of God.

Jesus said, preach the word to every tongue, tribe, and nation and then the end will come. Today, thanks to new technologies, what once seemed a nearly impossible task, is now happening at much greater speed, and that includes Bible translation.  Read more Do you really want GMO immune cells in your body?

And he looked toward Sodom and Gomorrah, and toward all the land of the plain, and beheld, and, lo, the smoke of the country went up as the smoke of a furnace.

And it came to pass, when God destroyed the cities of the plain, that God remembered Abraham, and sent Lot out of the midst of the overthrow when he overthrew the cities in the which Lot dwelt.  Genesis 19:28-29

What did Abraham witness that fateful day?  Did he see with his own eyes a Divine re-sculpting of the earth forming a great chasm that is linked to hell? Discover the great chasms of the Lord in scripture and how they impact your life and breaking news today. Join us as we explore this connection this week both in scripture study and a special video report, The Shift and the Rift.