The Day the World Changed

To Join us: Celestial Report MAJOR COSMIC RAY HEALTH ALERT FOR THE NEXT 3 DAYS

Your space weather for today is Flatline QUIET

A new facility — the National Bio and Agro-Defense Facility — meant to house top-of-the-line labs for research into foreign animal diseases will soon transfer from the United States Department of Homeland Security (DHS) to the U.S. Department of Agriculture (USDA), but outstanding issues could delay this.  Link

After five years of development, the Defense Advanced Research Projects Agency (DARPA) has greenlit an automated, networked radiation detection system known as SIGMA for use by the Port Authority of New York and New Jersey, promising new protections for the region. Link

Electromagnetic Pulse (EMP) weapons have the potential to disrupt unprotected critical infrastructure within the United States and could impact millions over large parts of the country.

The U.S. Department of Homeland Security (DHS) says it continues to prepare against evolving threats against the American homeland, most recently highlighting efforts to combat an Electromagnetic Pulse (EMP) attack which could disrupt the electrical grid and potentially damage electronics. Link

US Cyber Command shifts from defense to offense

The US Military's Cyber Command moved last week to its new home, an ultramodern building that cost $366 million, located in Fort Gordon in the state of Georgia. The head of the command, Gen. Stephen Fogarty, said the move to the new headquarters will allow the command to fully participate in offensive and influential operations. At a ceremony marking the move of the command, Fogarty said that "We’re going to take a much more direct role in the attack or offense and influence portion of the mission"    Link

The Left Secretly Preps for MAGA Violence After Election Day

The progressive coalition Fight Back Table has been meeting to game out what happens if Joe Biden doesn’t win by a landslide. It’s not pretty.

Last week, a coalition of leading progressive groups gathered on Zoom to begin organizing for what they envision as the post-Election Day political apocalypse scenario. Link

The intelligence wars over vaccine research have intensified as China and Russia expand their efforts to steal American work at both research institutes and companies.

Chinese intelligence hackers were intent on stealing coronavirus vaccine data, so they looked for what they believed would be an easy target. Instead of simply going after pharmaceutical companies, they conducted digital reconnaissance on the University of North Carolina and other schools doing cutting-edge research.

They were not the only spies at work. Russia’s premier intelligence service, the S.V.R., targeted vaccine research networks in the United States, Canada and Britain, espionage efforts that were first detected by a British spy agency monitoring international fiber optic cables.  Link This was reported by Ice Age Farmer.  Grains can spontaneously combust when put into storage damp.  There is also the explosive element of nano particles that can explode.

From grain elevators in Iowa, to sugar silos in New Orleans, to food warehouses in Essex, to grain reserves in Beirut — the world’s food supply chain is going up in flames. With farm labor running from COVID-19 tests, meat plants ordered closed, and weather warfare destroying crops, why not just torch the rest? Christian breaks down a few blazing coincidences this week.

I confess, I am on a rant against Dodder after my experience with it last year.  Why am I bringing it up yet again?  Because the precise mechanism that Dodder uses in the plant world is what Quantum Dot and Hydrogel will do to your body.  Quantum Dots/hydrogel are Nano SynBio that such the life force and moisture out of you as it grows, eventually turning you into a synthetic entity before killing you.

Parasitic dodders are paradoxical plants. Most plants rely on their leaves to recognize the perfect time to flower. Dodders lack leaves—and roots, for that matter—but they still flower right on schedule.

Previous work has shown that when dodders siphon off their host’s nutrients and water, they also pick up the host’s chemical signals. A study published last month in the Proceedings of the National Academy of Sciences presents evidence that when the host’s leaves send out the signal that it’s time to flower, the dodder understands that signal and creates flowers, too, Ariana Remmel reports for Chemical and Engineering News.

There are 145 different species of dodders. Each dodder begins its life as a seed that sprouts one anchoring root into the ground and then sends another tendril into the air. The tendril grows outward until it reaches a larger plant, and then the dodder latches onto it with additional appendages called haustoria. Once the dodder has a tight grip on its host, the anchoring root withers away.  Link

RETROGRADE MARS: For months, astronomers have been watching Mars creep eastward among the stars of Pisces. Today, Sept. 9th, Mars reversed course. Now the planet is moving westward. Astronomers call this "retrograde motion." It's a sign that Earth and Mars are about to have a close encounter.

The video, above, created by graphic artist Larry Koehn, shows why Mars "goes retrograde." Basically, Earth is lapping Mars in a two-way race around the sun. Our planet is faster, so Mars seems to go backwards during the weeks of closest approach.

On Oct. 6th, the date of closest approach, Earth and Mars will be only 62 million km apart--a small distance by interplanetary standards. In fact, its one of the finest encounters in years. Mars will be up all night long, outshining every star in the sky with a piercing burnt-orange hue.  Link

Astronomers completed the most rigorous hunt for alien life yet

Using a wide-field radio telescope in Australia, a team of scientists announced the completion of the broadest and most detailed search for alien civilizations yet. The telescope scanned 10 million star systems for signs of intelligent life, finding little evidence of extraterrestrial life.The telescope was searching for powerful radio emissions at frequencies that are similar to FM radio transmissions. These emissions are known as “technosignatures.”   Link A record amount of California is burning, spurred by a nearly 20-year mega-drought. To the north, parts of Oregon that don't usually catch fire are in flames.  Link

Technology Can’t Predict Crime, It Can Only Weaponize Proximity to Policing

Predictive policing is a self-fulfilling prophecy. If police focus their efforts in one neighborhood and arrest dozens of people there during the span of a week, the data will reflect that area as a hotbed of criminal activity. The system also considers only reported crime, which means that neighborhoods and communities where the police are called more often might see a higher likelihood of having predictive policing technology concentrate resources there.

In June 2020, Santa Cruz, California became the first city in the United States to ban municipal use of predictive policing, a method of deploying law enforcement resources according to data-driven analytics that supposedly are able to predict perpetrators, victims, or locations of future crimes. Especially interesting is that Santa Cruz was one of the first cities in the country to experiment with the technology when it piloted, and then adopted, a predictive policing program in 2011.  Link

Great religious books are often inseparable from tales of their discovery. Whether it is Joseph Smith unearthing the golden plates that would become the Book of Mormon, or Bedouin shepherds stumbling upon the cave-hidden jars that yielded the Dead Sea Scrolls, part of the significance of some sacred texts is derived from stories presenting the possibility that they might have never been known at all.

The Life and Morals of Jesus of Nazareth—popularly known as the Jefferson Bible—is another such book. Completed by Thomas Jefferson 200 years ago this summer, the infamous cut-and-paste Bible remained all but forgotten for the better part of a century before an act of Congress brought about its publication in 1904. Since then, it has been as controversial as it has been misunderstood.  Link 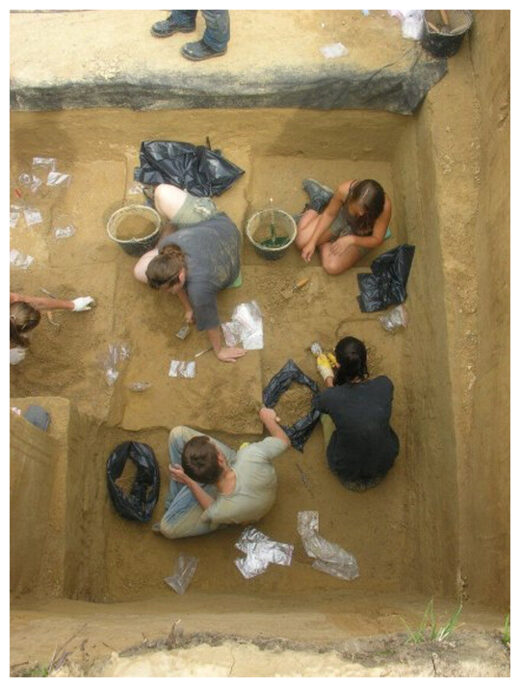 The team digging in search of bones for analysis
Ancient hunters stayed in the coldest part of Northern Europe rather than migrating to escape freezing winter conditions, archaeologists have found.

Evidence from Arctic fox bones show communities living around 27,500 years ago were killing small prey in the inhospitable North European Plains during the winter months of the last Ice Age.  Link

“They were wrapped in newspapers from the 70s and covered in these brittle plastic bags that crumbled as soon as you touched them.”

A treasure trove of Phoenician figurines and ceramic vessels – that sat in the storerooms of the National Maritime Museum in Haifa for decades – were rediscovered three years ago, when three archeologists from the University of Haifa examined them and realized they held important clues about the religious and social life of the Phoenicians who sailed the waters of the Mediterranean and beyond.  Link

The CEOs' statement comes as their companies scramble to maintain momentum as leaders in the race to bring their COVID-19 vaccines through approvals to patients worldwide—and as President Donald Trump said Friday that the U.S. “remains on track to deliver a vaccine before the end of the year and maybe even before November 1st” based on "shockingly good results" to date in clinical trials.  Link

As we compare the Book of Esther with the Book of Revelation we see that rage is entwined with the annihilation of a people.  We see in the opening of the Book of Esther that King Ahasuerus becomes enraged with Queen Vashti when she refused to come to him to the degree he removed her or had her killed.

Now in the second chapter, verse 21, we see Haman becoming enraged at Mordechai's elevation after being noted for saving the life of the king when two Bigthan and Teresh wanted to poison the king and Mordechai informed Queen Esther who told the king.

We also see rage surface again when Mordechai refuses to bow and prostrate himself before Haman, the king's right hand man.

It is very likely that we will witness this same rage from the Anti Christ.  We can see the environment of rage developing before our very eyes as prophetic scripture comes to life.  These are the days of division that our Lord Jesus warned us about when those in a man's house would be his enemy and His sword, the Rhema of God, would bring many divisions in our homes.   Not only will rage manifest in our homes, but the people to be annihilated, experience a raging environment in their communities as rage becomes tolerated as the new normal.