The amazing thing is that Jesus and the prophets told us thousands of years ago what the End Days would be like, and here we are! If the future battlefield is a mixed threat scenario where conventional, traditional, hybrid, geospatial, and convergent technology permeate the multi-domain threat environment, how do we account for the sleeping giant dwelling amidst this landscape — the quantum threat? Is it enough to assume our own advancing technology, properly understood and harnessed, will offset any negative or unforeseen strategic disruption or damage which peer rivals and enemies may devise? ... but what is the nature of the quantum threat as it functions alongside convergent technologies and other hybrid strategies? First a definitional excursion is warranted. Convergent technology signals a threat dynamic elusively diverse in origins and purpose where genomics, nanoscale technologies, neurological technologies, cyber technologies, biochemical, and

nanobiological systems are deliberately engineered to create a chimera-like array of mixed technical platforms designed to nullify, overcome, or defeat friendly defense systems. Hybrid strategies reflect an overall effort to achieve strategic objectives without using significant kinetic force.  This is accomplished via indirect and non-kinetic amorphous influence, psychological, and information systems, along with disinformation campaigns and cyber attacks — in combination with actual lethal force in a phased maneuver approach over a long term campaign. In many ways, it deliberately blends classical warfare theory with cutting edge strategy. But what of the quantum issue and its indirect destructive and insidious effects?  Link

Poisoning Them Softly is what the Homeland Security Newswire announced yesterday.  Poisoning, in conjunction with the neuroweaponry, and multiple chemical assaults against humanity, know for certain, that the trifecta including poisoning of humanity has begun.


History of Nerve Agent Assassinations Poisoning political opponents or enemies is not new. Reviews of chemical and biological weapons (CBW) usage through the 20th century similarly list successful and attempted assassinations with mineral poisons or animal and plant toxins in and outside of war. Modern chemical weapons (CW) – typically human-made toxic compounds standardized for use on battlefields – have rarely been selected to target individuals – but a spate of recent political poisonings indicate that this may be changing. On 20 August, the Russian anti-corruption activist Alexei Navalny fell ill during a return flight to Moscow and was hospitalized in the Siberian town of Omsk after an emergency landing. Members of his travelling party immediately suspected poisoning, an impression hospital staff reinforced when they refused Navalny’s personal physician access to his medical records.

The corn variety Sierra Mixe grows aerial roots that produce a sweet mucus that feeds bacteria. The bacteria, in turn, pull nitrogen out of the air and fertilize the corn. If scientists can breed this trait into conventional corn, it could lead to a revolution in agriculture. Photo from Wikimedia Commons / CC BY 4.0.

In the 1980s, Howard-Yana Shapiro, now chief agricultural officer at Mars, Incorporated, was looking for new kinds of corn. He was in the Mixes District of Oaxaca in southern Mexico, the area where the precursors to maize (aka corn) first evolved, when he located some of the strangest corn ever seen. Not only was it 16 to 20 feet tall, dwarfing the 12-foot stuff in American fields, it took six to eight months to mature, far longer than the 3 months needed for conventional corn. Yet it grew to those impressive heights in what can charitably be called poor soil, without the use of fertilizer.. But the strangest part of the corn was its aerial roots--green and rose-colored, finger-like protrusions sticking out of the corn’s stalk, dripping with a clear, syrupy gel.  Link

I bring this to you for several reasons.  During a Mini Ice Age in Europe my family grew espalier fruit alongside stone walls not only to have food but to have the funds to pay the laird's taxes.  This is how people modified agriculture in the past to deal with increasingly cold weather such as an ice age.  This is much better solution than new technologies.

Pantelleria—Italy’s most distant and least visited island, a rocky outcropping off the shores of Tunisia—is buffeted by desert winds and rarely sees proper rain. Moisture, what little there is, arrives mostly in the form of fog. How to survive in such a place? Ancient Pantellerians, over the millennia, devised an amazingly clever fog-catching garden design now known as the giardino Pantesco (“Pantellerian garden,” in Italian), each one for the sole purpose of nurturing a single sprout.  Link

For the first time, scientists have created pigs, goats and cattle that can serve as viable “surrogate sires,” male animals that produce sperm carrying only the genetic traits of donor animals.

The advance, published in the Proceedings of the National Academy of Sciences on Sept. 14, could speed the spread of desirable characteristics in livestock and improve food production for a growing global population. It also would enable breeders in remote regions better access to genetic material of elite animals from other parts of the world and allow more precision breeding in animals such as goats where using artificial insemination is difficult.  Link

Astronomers have discovered a rare molecule -- phosphine -- in the clouds of Venus. On Earth, this gas is only made industrially or by microbes that thrive in oxygen-free  Link

In the OMG category, when I saw this pop up in the scientific journals, I knew genetic modification of biological life was going to the next level.  This is the first occurrence that I have seen. Nano is all about embedding sensors into biological to track and trace everything in that human, animal, plant, or organisms God given workings.  Platforms are being developed to real-time watch the depopulation event.  But the more troubling news in this article is the wording "assisted fertilization".  Why?  Because the nano particles and coming vaccine sterilize God's biological life.  To reproduce you will need assistance.  But the biological life, lets say human, will not be what the military calls the Old Humans (God's creation) but engineered through nano to design what they call the New Humans.  These new humans are also augmented and enhanced (better than God's creation) superheros, if you will.  Worse than that as is demonstrated in various articles I am presenting to you today could include nephilim, giant, or alien DNA or RNA expression making these creatures abominations and monsters.  The goal is to have depopulation wrapped up by 2025 and the New Humans on board.  Originally, the timeline was 2030, but they have moved it up.  The nano you see below will make introduction of GMO back in the 1990's appear as child play.  Will these New Humans have souls?  Will they be redeemable?  We very well may be the last biological evidence generations of God's creation.  That is both sobering and humbling.  Make the best use of your time to give glory to God.

Microrobots: Toward In Vivo Applications Medical microrobots (MRs) have been demonstrated for a variety of non-invasive biomedical applications, such as tissue engineering, drug delivery, and assisted fertilization, among others.  Link

The western wildfires appear to be dumping some metals which then ignite.  What is the purpose?  This scientific news just popped up.  Is the evil crowd attempting to change the conductivity of our planet or tweaking it just a bit so that when the cyclical catastrophes hit the damage they due will be even more catastrophic? The development of high-performance potassium ion battery (KIB) electrodes requires a nanoengineering design aimed at optimizing the construction of active material/buffer material nanocomposites. These nanocomposites will alleviate the stress resulting from large volume changes induced by K+ ion insertion/extraction and enhance the electrical and ion conductivity.

Are you discerning extreme spiritual warfare?  Are you bone weary of the spiritual battle?  Are you on edge or even angry?  Please revisit my article covering the Australian wildfires when I discovered that the US sent autonomous NextGen Fighter Jets equipped with "magical" powers and using Geomancy and SpellBooks to cast spells upon the people and land of Australia under the cover of wildfire.  The link is below. Christians in wildfire situations should:

This is spiritual warfare against humanity.  All Christians must take action.

Under the Smoky Veil of Wildfires Hybrid Techno-Witchcraft is Unleashed, Link

Setting of the sandbox of the Anti-Christ

AI ethics groups are repeating one of society’s classic mistakes

The big picture: International organizations and corporations are racing to develop global guidelines for the ethical use of artificial intelligence. Declarations, manifestos, and recommendations are flooding the internet. But these efforts will be futile if they fail to account for the cultural and regional contexts in which AI operates.  Link

It looked like Mars, or the Southern Californian wasteland in Blade Runner 2049, or the deserts of Dune. Almost 100 wildfires have ravaged the western United States in the past month, scattering particles of ash and smoke into the air and forcing 500,000 people to evacuate their homes in Oregon alone. On Wednesday, residents across the West, already suffering from a pandemic, economic collapse, wildfires, and dangerously bad air quality, woke up to a dark, bronzed sky that nearly shut out all daylight. As the day wore on, the smoke thickened and receded, making the city seem red at some hours, amber at others. Masks to ward off the coronavirus now served double duty.  Link

I bring the following article to you because the forbidden nephilim technology is using biomimicry camouflage to cloak their stealth operations.
Researchers recently found evidence of some very, very old camouflage. 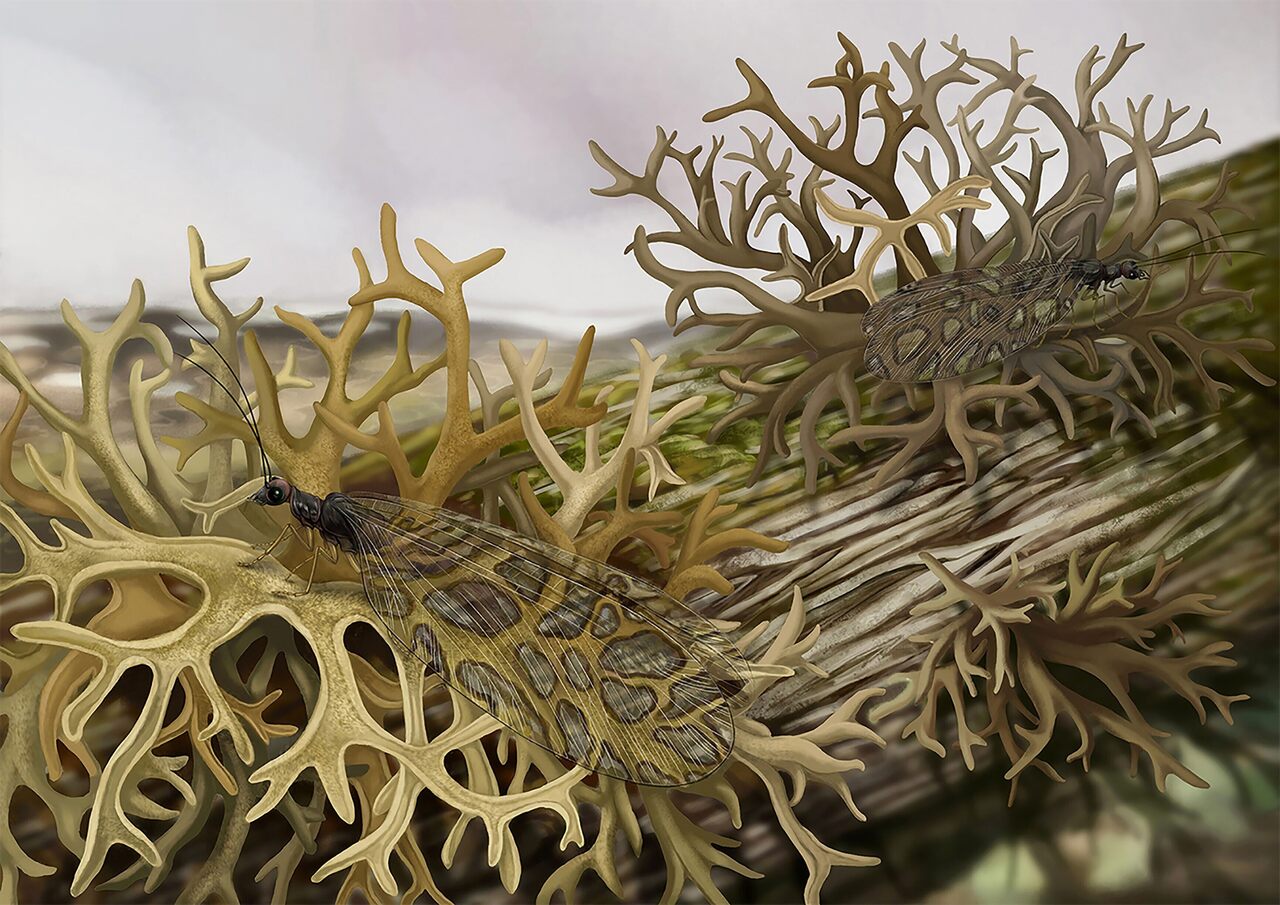 Lacewing or lichen? In this illustration, they're lookalikes. Xiaoran Zuo / CC0
Around 165 million years ago, the land that is now the fossil-filled Jiulongshan Formation, near the village of Daohugou in Inner Mongolia, was covered with lichens, mosses, and liverworts. Above that shaggy, pillowy surface was a wash of green: fern fronds, conifers, and ginkgophytes, including vanished relatives of modern gingkos. (It looked a bit like the present-day Olympic Peninsula in western Washington—lush, with nary a petal in sight.) Flowering plants wouldn’t show up for another 40 million years, but insects had already arrived. Dragonflies and damselflies zipped through the air. To evade them and the insect-gobbling dinosaurs that trundled below, moth lacewings probably did their darnedest to blend in.  Link

Possibly 20,000-year-old Domesticated Dog Emerges From Italian Cave
The remains of an ancient domesticated dog that spent its life with humans has been unearthed in an Italian cave . Believe it or not, this ancient domesticated dog is now considered to be Europe's earliest pet dog, and it might 20,000 years old! How Wolves Became Wolf-like And, Then, Our Early Friends The early ancestors of gray wolves (Canis lupus) were a group of carnivores, named the creodonts, that roamed the northern hemisphere between 100 and 120 million years ago. About 55 million years ago this ancient species gave rise to the carnassials, a group of wolf-like animals that had specialized jaws and razor-sharp teeth for tearing and eating meat. One member of this family, Miacis, is thought to be the common ancestor of all present-day wolves, bears, raccoons, weasels, and dogs.  Link 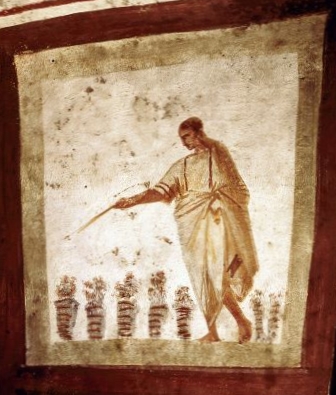 Supernatural Depictions of Jesus in Early Christian Art
Did Jesus use a magic wand when performing his miracles? It seems so—if we are to judge by some of the earliest depictions of Jesus in Christian art. Early Christian iconography provides us with precious insights into the esthetics of early Christians. Inspired by biblical and apocryphal texts, the earliest Christian imagery is also a window into the theological thinking of the third- and fourth-century followers of Jesus. Coming primarily from funerary contexts, early Christian art is especially rich in mural paintings found in catacombs and in smaller sculptures, such as sarcophagi and tombstones. It is thus no surprise that the repertoire of motifs expressed in these media is mostly associated with the afterlife and healing (physical or spiritual). Link


Coronavirus likely to target the brain as well as lungs

The new study has found that, among some patients, the virus uses the brain as a fertile breeding ground in which to replicate itself.