by SH staff January 31, 2018
​​SMLXL
A whirlwind of subterranean activity is occurring under our feet.  Isaiah prophesied, “Men will go into caves of the rocks and holes of the ground before the terror of the Lord and the splendor of His majesty, when He rises to make the earth tremble.  In that day men will cast away to the moles the bats.”  We can now see this coming to pass as rising populations, urbanization, and the unleashing of earth cataclysms of judgment are causing mankind to flee the earth’s surface to the subterrestrial world; the abode of moles, bat, demons, alien creatures and inter-dimensional life forms.
The subterranean world includes human-made tunnels, underground urban spaces which include cities and transport systems, and natural cave networks which have been utilized by mankind for various purposes since the dawn of time.  This underground labyrinth is becoming increasingly relevant to global security and safety to hide from the face of God.
DARPA has announced SubT, a new challenge, to exploit the subterranean world via the physical and virtual means.
This is a time-sensitive challenge.  DARPA is seeking innovative, enhanced, and novel technologies to explore the unknown.  The goal is to map subsurface networks in often unpredictable conditions to accelerate military and first responder’s previously unimaginable situational awareness for their operations. 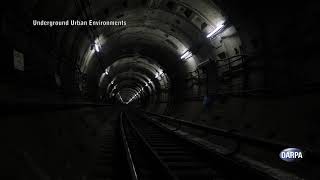 ​​SMXLL
“We’ve reached a crucial point where advances in robotics, autonomy, and even biological systems could permit us to explore and exploit underground environments that are too dangerous for humans,” said TTO Director Fred Kennedy. “Instead of avoiding caves and tunnels, we can use surrogates to map and assess their suitability for use.
Through the DARPA Subterranean Challenge, we are inviting the scientific and engineering communities—as well as the public—to use their creativity and resourcefulness to come up with new technologies and concepts to make the inaccessible accessible.”
DARPA-funded and self-funded teams will compete side by side. Teams can compete in one or both of two complementary research tracks: the Systems track, to develop hardware and software to test on a physical course; or the Virtual track, to develop software-based approaches to test on a simulated course.
The representative backdrop for the competition events is a disaster-related search and rescue response to a developing and time-sensitive situation where the layout of the course is unknown, could degrade or change over time (i.e., dynamic terrain).
The SubT Challenge will include three Circuits and the Final event which will be held in 2021.  The first Circuit focuses on human-made tunnel systems. The second will focus on underground urban environments such as mass transit and municipal infrastructure. The third will focus on naturally occurring cave networks.
The Final event will climax in 2021 with challenges from all three environments.
As you read the following account of the ancient Bible notice the particular order in which men hide in the dark caverns of Gehinnom.
“The sky receded like a scroll being rolled up, and every mountain and island was moved from its place. Then the kings of the earth, the nobles, the commanders, the rich, the mighty and every slave and free man hid in the caves and among the rocks of the mountains.  And they said to the mountains and the rocks, “Fall on us and hide us from the face of the One seated on the throne, and from the wrath of the Lamb.”
Share Share on Facebook Tweet Tweet on Twitter Pin it Pin on Pinterest
Back to News