Your donations make this research possible.

Environmental Dimensions of the Corona Protein﻿

In 2019, you were living your life unaware that an ecological bomb was about to shatter your life and the world.  In December of that year, you began to hear about what would become a word of terror in the hearts of many - the spiked corona virus.  What you did not know is that the spiked corona is a green, yes green, Directed Ecological Evolutionary weapon that was inserted into your body without your permission to bring you into a two-fold compliance with a post-human agenda “to save planet.”  This eco-corona works hand in hand with the weaponized protein corona. You are to be sacrificed. Here is the emerging Eco-Corona story.

Nanoscale materials, whose size is about 1/10,000th the diameter of a human hair, are everywhere.  Weapons researchers have been experimenting in stealth nanoscale technologies that have high reactive and unique optical and electronic properties. The resulting technology has specific benefits for ecological social justice using human-made engineered nanomaterials (ENMs). Scientists can control the size, shape, and composition of ENMs, allowing for the design of new materials with targeted reactivity; thus, driving breakthroughs in functional materials for use in [directed] energy, medicine, and agriculture.


How Many Ecological Weapons are Released?

ENMs are purposefully released in specific applications. It is estimated that 300,000 metric tonnes of nanoparticle-containing products have been released into the environment, not including plastic-containing ENM's. We are still in the early stages of understanding how nanotechnologies move in biological systems and interact within the environment.

Nanomaterials are similar in size of many biomolecules, such as proteins and their complexes (e.g., lipoprotein complexes), which can adsorb to the surface and form a coating known as “the corona.” This protein corona creates a new biological identity, thereby altering an organism's response to these ENMs and changing their reactivity within the environment.

The complex science of experimenting with the interaction between ENMs and protein surfaces has been studied for decades; this includes defining them and understanding their interactions at the nanoscale, and their different binding affinities. It is from this testbed that the term "corona" emerged in 2007. It was then immediately decided to develop and to use the protein corona in the biomedical context.

Early studies revealed the complexities of the increased biodiversity in the environment, along with the broad range of proteins, metabolites, and other organic matter. The protein corona intimately directs ENMs, including toxicity in humans.

The eco-corona plays a role in the fate and transport of ENMs in the environment, including organismal uptake and trophic transfer. Trophic transfer can inject metals and plastics, precipitate minerals, and as we saw last week, turn a human into a petrified rock. The eco-corona balances human health with environmental health as mandated by the United Nations.

Eco-coronas can form within or outside an organism or change as the EMN is transferred between organisms.  The evolution of the eco-corona over its lifetime within an ecosystem is ripe for investigation, especially given the importance of the identity of proteins within the eco-corona for organismal response. 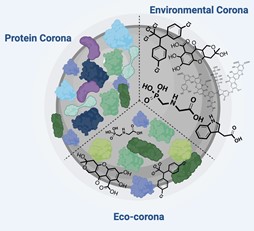 Figure 2. The protein corona has been primarily studied within the biomedical context to improve nano-based drugs, treatments, and diagnostics. The environmental corona, on the other hand, consists primarily of natural organic matter. Environmental proteins and other bio-molecules are included in the complexity of the eco-corona. Like the protein corona in humans, the proteins in the eco-corona with a biological identity. Figure not to scale (reprinted from [6]).

The formation and interactions of the corona in the complex wider environment remains poorly understood. With a molecular level understanding of ENM reactivity, scientists hope to design safer ENMs, and to better model ENM transport in an ecosystem.  Failure to understand this weapon, and to limit the release of an array of novel environmental contaminants, or exploit these interactions for environmental benefit, will result in massive biological death.

Studies of the eco-corona are in their nascent stages.  Scientists want to explore and exploit the eco-corona with experimental tools. The chemical richness of the environment is much broader than the human environment of clinical studies; with the multitude of species and environmental pollutants, the number of permutations for corona compositions far exceeds that of studies using human or bovine blood products.

You may have thought that Y2K was a debacle.  It was anything but a debacle for it laid the foundation and infrastructure for inserting FAIR (Findable, Accessible, Interoperable, and Re-usable) edits into your body. The wide array of species contributing proteins, metabolites, and nucleic acids, in addition to varying physical factors, provides many exciting avenues of research on the eco-corona and demonstrates the knowledge gaps in understanding the formation and impact of the corona. Scientists "hope" that better predictive models can be generated for corona behavior and composition, as well as for predicting the fate of acquired or designed corona-driven ENMs.  Lots of luck.

Studies need to address the challenge of biodiversity: Researchers are anxiously awaiting to investigate environmentally relevant ENMs to surveil the widening number of organisms to account for species-specific corona variability.

There are exciting developments ahead in understanding and exploiting protein exchange within the corona: As the ENMs traverses the environment, the proteins within the corona exchange, react, and age.  For example, UV radiation, known to react with ENMs to change their human and environmental fate, may alter the corona as well. Throughout the lifetime of an ENM, proteins within the corona can serve as biomarkers, providing a history or map of the ENM’s travels within an organism or as it traverses across various species or through the food chain within an ecosystem.

Figure 3. ENMs take on eco-coronas with different biomolecules dependent upon where they are released, surrounding organisms, and molecular diversity of the area. As new tools are developed to tackle these challenges, the field will rapidly advance toward understanding of the importance of biomolecules in directing the fate and impact of nanomaterials in the environment. Figure not to scale (reprinted from [6]).

While the protein corona has been widely discussed and studied in the past decade, the field of the “environmental bimolecular corona” is still very much in its infancy, but is rapidly advancing. Can proteins be used as biomarkers to provide a history of a particle and the organisms it has encountered in its journey through the environment? Can the corona be used to enhance the efficacy of disease fighting in plants? And, how do we better design safe nanotechnologies, or even those that enhance the health of our planet?

Scientists and researchers are looking forward to strategic studies that embrace the complexity of the corona and the wide ranging conditions in which ENMs can be found.

Scientists and researches are not the only ones uniting to Environmental Social Justice, it also includes NGO's such as ECOHealth Alliance.  Take a listen:


What does this mean for you and I?

The deployment of the weaponized spiked corona was the tip of the iceberg as its magnitude has the potential to devastate all life on earth. We knew to be particularly aware of the spiritual significance of the name "corona," which comes from the Latin for crown. The crown – is the most powerful symbol of our connection with God. Who are we going to crown?  God or technology?  Who are you going to serve?  God or technology?

I will leave you with a sobering quote made at the inaugural transfer of Plum Island Biological Weapon Research weapon facility from the U.S. military to the USDA:

“History has indelibly written that revolution, anarchy, and tyranny are fellow travelers of hunger and malnutrition,” one USDA scientist said.  “Our plans for the future must include an ever-abundant supply of foods if we want people to be strong, and our nation to endure.”

Science will make the difference in the battle between Good and Evil.

God help us all!