Four years ago I noticed a flood of news in the scientific journals about:

This is why several years ago, when you citizen scientists out there noticed that the snow was not normal, you conducted your own experiments.  You  discovered that most of the snow burned, melted, blackened, and had a different freezing and melting point.

Techno-ice and snow contain silver nanowires in hydrogel.  They are ice-templated onto nanoscopic building blocks.  They add carboxymethylcellulose (CMC-wood gum) leading to the fabrication of hybrid aerogels with highly improved mechanical properties with dangerous and explosive capabilities,  Link.

Electromechanical characterizations allowed for piezoelectric properties of these hybrid aerogels. Pizoelectric is the generation of electricity or of electric polarity crystals. 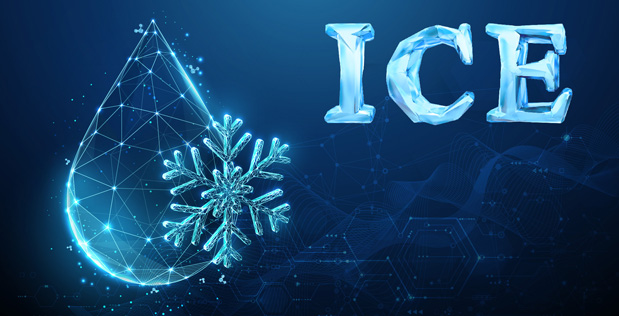 Why would this be necessary if the globe is heating up in biblical proportion?  The fact of the matter is that we been entering into a cyclical time where the earth will descend into another Ice Age in the best case scenario, and at worse case, Snow Ball Earth where the entire globe is encased in ice.  The elite know this.  Never wanting a good crisis to go to waste, they are planning to exploit this coming event ,as if it will not be difficult enough to survive through it.

In order to perform technological marvelous acts, several biochemical adaptations have been identified as supporting factors to freeze tolerance. These include the following:

Microbes, plants, and other animals have adapted to live in cold environments, while humans have not. As other organisms have evolved ways to manipulate the ice itself for protection and maintaining life.  The UN sustainability mandate frowns of the fact that people pile on clothes, break ice, and burn fuels and materials to keep warm from the frigid chilling impact off cold.

The military in its future thinking believes they will be spending extended time in the arctic in evolving operations in extremely cold temperatures. Therefore they are concerned with human frostbite, ice accumulation on equipment as well as degraded electronics and machinery performance. What is the solution?  To genetically modify humans using Tartrigrades and the Resurrection Plant and manipulating the elements to change the freezing point and very nature of snow and ice into electro-mechanical machine. Antifreeze proteins (AFPs) or ice structuring proteins (ISPs) refer to a class of polypeptides produced by “Insects, fish, plants and freeze-tolerant organisms have evolved natural mechanisms to prevent ice formation and thrive in extreme cold,” said Anne Cheever, ICE program manager. “These properties could be leveraged as part of the ICE program to develop persistent anti-icing coatings for surfaces and even produce specialized small molecules that work synergistically with biodegradable antifreeze proteins,” according to DARPA.

AFPs bind to small ice crystals to inhibit the growth and recrystallization of ice that would otherwise be fatal.

One  strategy that will be evaluated has been developed to provide freeze-resistant Quantum Dots (graphene hydrogel and nanowires) which can easily be conjugated with biomolecules. The new ice-snow is a deep eutectic solvents (DESs) and regarded as one kind of green solvent due to their good stability, biocompatibility, and conductivity. The eutectogel prepared with DESs as the solvent has also attracted attention.The as-prepared eutectogels showed high strength, high conductivity, and excellent frost resistance.

“The ability to control and modulate the properties of ice crystals will provide novel capabilities, actionable solutions, and strategic advantage for cold weather operations.”

In the Bible it says that the Anti-Christ brings down from heaven.  It is one of the wonders he demonstrates.  Graphene is already touted as being "wondrous and magical." Could the dispersion of this reformatted explosive snow and ice fit that description? As the snow lazily falls this year, ponder the fact, that increasingly, it will be artificial snow which is an environmental sensor with electrical and mechanical properties.  No longer will delicate snowflakes and ice moisturize and hydrate humans, earth, animals, and the plants.  How sad it is to see the corruption of man shadow the entire globe.

He sends his command to the earth;
his word runs swiftly.
16 He spreads the snow like wool
and scatters the frost like ashes.
17 He hurls down his hail like pebbles.
Who can withstand his icy blast?
18 He sends his word and melts them;
he stirs up his breezes, and the waters flow.
Blessings,

Key Note Speaker at Red Pill 2022 on:  Graphene as a Weapon