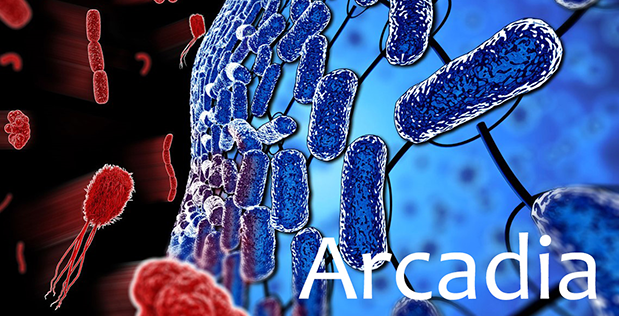 Defense Advanced Research Projects Agency (DARPA) has begun a new program to engineer a synthetic Garden of Eden.  Academia and the military have been reverse engineering creation and are now going to tackle the Garden of Eden in a project known as Arcadia. How will they build this Garden?  Building from the bottom upward, they are going to weaponize, redirect, and restructure bacterial biofilms. DARPA and the utopian visionaries believe in this way they will achieve the Arcadian vision of living in harmony with nature.

For those of you not familiar with Arcadia, its basis is a vision of pastoralism and harmony with nature.  Its name originates from a Greek province.  The "Garden" is an idyllic vision of unspoiled wilderness with poetic vistas, wide-open spaces, bountiful natural splendor, is inhabited only by sparse wandering shepherds.  In today's world it is regarded as unattainable, an extinct paradise.  Mythology describes the Edenic life as the Golden Age where noble savages live virtuously without pride and avarice in an uncorrupted utopian state.  The few nomadic humans live a subsistence life that dates back 10,000 years ago.

It is important to note that Arcadia was not the domain of the Living God, but its god is Pan, a virgin wilderness that is home to the god of the forest and his court of dryads, nymphs, and other spirits of nature. It is a perverted paradise, an abode of supernatural entities; not an afterlife for deceased mortals.

During Renaissance times it was associated with Gnostic and Rosicrucian belief systems.  In 1598, Lope de Vegas envisioned this in his work on Arcadia:

“Does not the pleasantness of this place carry in itself sufficient reward for any time lost in it, or for any such danger that might ensue? Do you not see how everything conspires together to make this place a heavenly dwelling? Do you not see the grass, how in color they excel the emeralds ...? Do not these stately trees seem to maintain their flourishing old age, with the only happiness of their seat being clothed with a continual spring, because no beauty here should ever fade? Doth not the air breathe health which the birds (both delightful both to the ear and eye) do daily solemnize with the sweet consent of their voices? Is not every echo here a perfect music? And these fresh and delightful brooks, how slowly they slide away, as, loath to leave the company of so many things united in perfection, and with how sweet a murmur they lament their forced departure. Certainly, certainly, cousin, it must needs be, that some goddess this desert belongs unto, who is the soul of this soil, for neither is any less than a goddess worthy to be shrined in such a heap of pleasures, nor any less than a goddess could have made it so perfect a model of the heavenly dwellings.”

It does not take a wild imagination to see why the global managers want to engineer such a world for their domination.

In modern days, Arcadia has been explored in many fantasy works as a magical realm in a fictional universe.  Isaac Asimov explored it in his novel Second Foundation.  In the movie Resident Evil: Extinction, the characters seek to travel to Arcadia, Alaska, which is promised to be free of zombies. But in Resident Evil: Afterlife 3D, it is revealed that Arcadia refers to the USS Arcadia, a ship that collects survivors for experimentation.  Sound familiar?

DARPA Launches Arcadia to Engineer the Garden of Eden

Bacteria are the most abundant and diverse life-form on Earth, coating almost every surface, with the majority spending their entire lives in colony biofilms. This lifestyle is universally perceived as problematic since biofilms contribute significantly to human illness and damage military equipment, costing billions of dollars to both the healthcare system and the military.    The DARPA Arcadia program will develop “probiotics” to protect military materials and equipment using naturally occurring microorganisms to generate robust and beneficial coatings.  Many of these biofilm probiotics will contain tough chitosan in nano form.  The futuristic "Garden" will not only contain weaponized biofilms for military use but all infrastructure, from roads to buildings, in which they will be self-healing "living" edifices.   One really needs to wonder why in such a pastoral scene that military equipment is necessary at all?

How Does this Biofilm Work?

Essentially, this bacterial biofilm will be a stable and functional living paint.  The science community has new tools for bacterial control, and they look forward to manipulating these tiny organisms for their intended new "beneficial" function.  To achieve this, they must remodel the species interactions and formation, requiring high-speed microfluidic testbeds to grow, track, and test biofilms. Using a stepwise process for species displacement, a problematic species is displaced with a preferred, stable one. We are currently witnessing this stepwise displacement of the “problem” human population through the use of the mandatory, gene editing SARS-CoV-2 tool in order to build a “preferred,” stable community – the new world.

What is the Timing of the Eden of Arcadia?

This project will include:

The technology will be developed over two phases.

During Phase I (24 months), performer teams will directly engage with Independent Verification and Validation (IV&V) partners, coordinated by DARPA, who will provide Department of Defense-relevant biofilm samples.

Performer teams will then develop high-throughput testbeds to characterize these samples and validate their models.

During Phase II (24 months), performer teams will continue direct engagement with IV&V partners for community testing in the real-world. Communities must be stable and exhibit track-associated function after two months in the field.

Although a lofty goal, this utopian vision for a man-engineered "Garden" could be achieved in under five years.

There are many problems associated with this idyllic vision that DARPA seeks to make a reality. The first being that the Garden of Eden cannot be engineered by any entity or man.  It was created by God.  It is the dwelling place for the man that God created so He alone could fellowship with His creation.

In addition, anyone who has experienced a biofilm disease knows how tenacious it is.  If manipulated with a chitosan, an “iron coating” if you will, it would be impervious to destruction, which is why the military wants to use it.  I must ask again, if this "Garden" was somehow achieved, why is a military necessary?

May you have perfect discernment in the days to come,

Additional details of the program schedule and metrics are available in the broad agency announcement at https://sam.gov/opp/636ef1cc998e4b1299f7cd19b8e4c6db/view.

1. Defense Management: Observations on Changes to the Reporting Structure for DOD's Corrosion Office and Its Implementation of GAO Recommendations. https://www.gao.gov/products/gao-19-513.